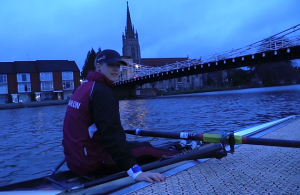 Well I did it… I went out in my single and it wasn’t as bad as I thought it would be. Getting in and out of the boat was wibbley and nerve racking but once on the water, well it all came flooding back. I was not perfect, nowhere near in fact but I loved every minute of it even though it was a miserable day!

After speaking to Malcolm in October I came to the realisation that I would not be able to do this in my single sculling boat, it is too thin and too light to withstand the chop that I will be experiencing from Tower Bridge onward. My thought was to use a boat similar to the singles our Para-Rowing Arms and Shoulders rowers use… These are wider, heavier and under each rigger there is a float to help with stability. It should therefore be sturdy and stable but faster than Malcolm’s 20ft wooden skiff! I didn’t really know how I could get hold of one of these though. I don’t think Marlow Rowing Club have one, GB Rowing would not be able to lend me one as their Para-Rowers take priority of course. There is the option of buying one I guess but we would have to find sponsorship first as we don’t have that sort of money tucked away under the mattress! Also, I need it from January to the end of September so we really don’t have time to find a sponsor.

One great thing about rowing with Marlow RC on a weekend is the breakfast and chat after the outing. One morning after my first outing in a coxed four for 2 years, I was chatting to John Tetley who is a Marlow RC coach and who works as a Boatman for GB Rowing. His job involves looking after, fixing and replacing GB Rowing boats and all other equipment… he is also in contact with the big cheese/top man at Filippi… they not only made my single scull, they make the Arms & Shoulders Single Sculling Boats too!!!
Next thing I know amazing John Tetley is out in Italy with the GB Rowing Squad and he had a little chat with the guys at Filippi and… they are loaning me a boat… for 9 months and it should arrive sometime in January!!! BOOM!!! 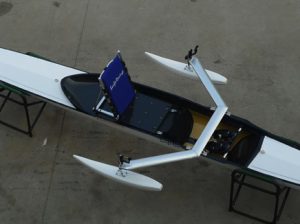 It will look similar to this but I will have a standard sliding seat. The seat you can see here is the fixed seat the Arms & Shoulders Athletes use as they are unable to use their legs, so they are strapped in both for their stability and to make sure they all have the same amount of movement.

So, about the training… I am hurting and I have blisters which is how it should be! I have just started gently for now though…

At the moment they are not long sessions but I have to start somewhere, also I think I can feel the fitness slowly returning and it’s really rather exciting! Eventually I will stretch the sessions out and be doing more in the mornings before work, I am going to need to start sitting on the ergo for a couple of hours at a time, getting my body used to just keeping going but stopping every 30mins or so to re-fuel as that is the routine I will have during the 40+ hour paddle.

I am also going to chuck a few longer ergos, day long rows, starting rowing at midnight for a few hours and other little tricks to get my body used to not switching off. Night time will be the hardest as my body will be saying ‘sleep now’, but I can’t allow my body to win that battle! It is still all a tad daunting but I won’t be on my own… I have a few wonderful people who have offered to help and will do some training with me… crazy fools!!!

Another of the things we have started to do is some filming. By the end of February/beginning of March, we will have a short promo video that will go out on social media and that we will also send to companies to ask them for their support. There are a few things we need to get across in this video; the challenge itself and why on earth I am doing such a crazy thing, the challenges I will face along the way including how my eyesight will effect me… and last but not least how people can help. The further I get through life the more I realise it is about who you know far more that what you know sometimes. I met Marissa at my close friend Fiona’s 30th Birthday party and since then Marissa has set up Holden Media Pro… she is now doing the filming, editing and producing of any TGTR2016 media we might need! Thankyou Marissa for doing this for us, it is so exciting to have you with us on this journey!

If you would like to know how you can get involved in this, please contact us at info@IN-vision.org.uk and we can send you all the information you might need.

Enter your email address to receive emails announcing exciting news, events and goings on at IN-vision. We promise not to fill your inbox with junk emails, and will only send updates occasionally.